I have probably listened to "A Dream" by Common (featuring Will I.Am and excerpts by Martin Luther King Jr.) more than any other song in my life. Common is one of my favorite rappers, and the movie that it was written for -- Freedom Writers -- had a huge impact on me. And once, God even sang it to me. 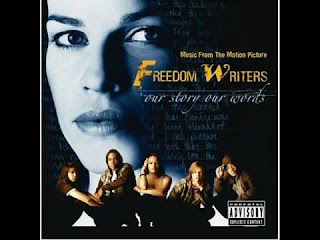 The movie tells the real life story of Erin Gruwell, a teacher in Long Beach, California, whose first teaching assignment was a class of at-risk students including gang members and refugees. To reach the kids, she incorporated unconventional methods including journalling and teaching about the Holocaust to bridge racial differences. All of her students ended up attending post-secondary education, she published a book showcasing their journal entries and many are involved with running the Freedom Writers Foundation to this day.

When the movie was released, I was running the ROUTE Program for at-risk refugee youth so I brought them along with me to see it. It was memorable...several of my kids were visibly moved seeing young people with similar struggles portrayed on screen. The ROUTE Program subsequently introduced several of Gruwell's techniques including journalling, the line game and the toast for change.

Around the same time, I often visited several young refugee men incarcerated in the Winnipeg Remand Centre. One afternoon after visiting a Sudanese guy, I walked out of of the jail into the daylight and I heard God's still small voice singing to me: "I have a dream that one day we're gonna work it out out out" from "A Dream", the song by Common featured in the Freedom Writers. This was accompanied by a palpable feeling of joy in my heart that I'd never before experienced. It was the most curious experience.

Shortly afterwards, my pastor lent me his copy of Chasing the Dragon by Jackie Pullinger, who ministered to addicts and gang members in the drug dens of Hong Kong's Walled City. Nearly every time she'd enter this underground city, which she describes as one of the most "revolting places in the world", she'd encounter "this wonderful feeling inside, the thrill you get on your birthday. I found myself wondering why am I so happy?"

Her account confirmed to me that I was called to minister in what many call the low places of our city with a gladness that can only come from above. I've returned to the Remand Centre on many occasions and often feel that same surge of joy and I also experience it in other locations.

And although My Heavenly Papa never sang me a Common song again, He unquestionably sings over my life.

For the LORD your God is living among you. He is a mighty savior. He will take delight in you with gladness. With his love, he will calm all your fears. He will rejoice over you with joyful songs. (Zephaniah 3:17) 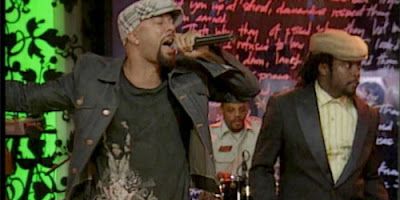 [Chorus - Will.i.am and Martin Luther King]
(I am happy...I Have a Dream) I got a Dream
(That One Day ) We're gonna work it out out out
(I Have a Dream) I got a Dream
(That One Day) I'ma look deep within myself
(I Have a Dream) I gotta find a way
My Dream Is To Be Free
In search of brighter days, I ride through the maze of the madness,
Struggle is my address, where pain and crack lives,
Gunshots comin' from sounds of Blackness,
Given this game with no time to practice,
Born on the Black list, told I'm below average,
A life with no cabbage,
That's no money if you from where I'm from,
Funny, I just want some of your sun
Dark clouds seem to follow me,
Alcohol that my pops swallowed bottled me,
No apology, I walk with a boulder on my shoulder,
It's a Cold War - I'm a colder soldier,
Hold the same fight that made Martin Luther the King,
I ain't usin' it for the right thing,
In between lean and the fiends, hustle and the schemes,
I put together pieces of a dream
I still have one
The world's seen me lookin' in the mirror,
Images of me, gettin' much clearer,
Dear Self, I wrote a letter just to better my soul,
If I don't express it then forever I'll hold, inside
I'm from a side where we out of control,
Rap music in the 'hood played a fatherly role,
My story's like yours, yo it gotta be told,
Tryna make it from a gangsta to a godlier role,
Read scrolls and stow slaves,
And Jewish people in cold cage,
Hate has no color or age, flip the page,
Now my rage became freedom,
Writin' dreams in the dark, they far but I can see 'em,
I believe in Heaven more than Hell,
Blessings more than jail,
In the ghetto let love prevail,
With a story to tell, my eyes see the glory and well,
The world waitin' for me to yell "I Have a Dream"