I'm thankful for the little things.

I walked to the prayer room today. My usual route winds through through the greenspace and back lanes of my West Broadway hood. I happened to pass a Syrian family moving in to an apartment building, and was mightily amused to see their two young children outside the building using a couch that had not yet been moved in as a trampoline. They were giggling and it was a tiny little slice of joy that I didn't catch on camera, but is etched on my heart. 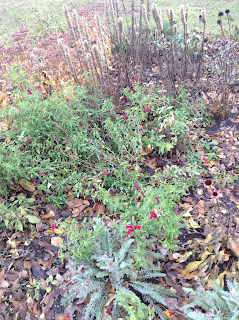 On the way was Peanut Park, one of my favorite spots since childhood. I stopped to admire some tiny red flowers that visually popped in a garden that's fading into winter but still lovely.

Later at Starbucks, my jaw dropped when a fairly ordinary sunset suddenly turned several shades of pink before disappearing into the November evening. It happened so quickly I wasn't able to capture it on film, but it was beauteous.

It could've been just another ordinary afternoon, but several little moments conspired to make it memorable.